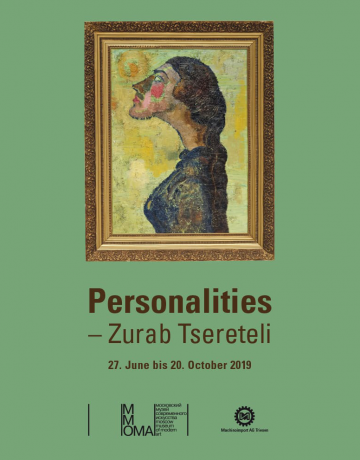 Zurab Konstantinovich Tsereteli was born on January 4, 1934 in Tbilisi (Georgia). For the first time Liechtenstein will host the artist’s solo exhibition, dedicated to his 85th anniversary, under the auspices of the cultural exchange programme sponsored by the Moscow Museum of Modern Art. The exhibition will feature paintings and drawings, the subjects of which are based on traditions, folklore, myths and religious motifs. Different facets of the artist’s personality, both hidden from sight and public, show their depth in apparent simplicity. Zurab Tsereteli, President of the Russian Academy of Arts, is one of the greatest contemporary artists. He received many awards, was granted the title of UNESCO Goodwill Ambassador and Chevalier of the Legion of Honour (France). Recently, he was also awarded the Order of Friendship “Dostlug” by the Azerbaijani President Ilham Aliyev.

Before everything else, the artist is famous for his impressive monumental sculptures and monuments located in different corners of the world. The portrait sculptures of Yuri Gagarin and Leo Tolstoy adorn Montevideo squares. In Jerusalem, there is a memorial to the victims of the Holocaust created by him. Among his sculptural works there are Nikolai Gogol in Rome, St. Nicholas in Bari, “Good Defeats Evil” in front of the UN headquarters in New-York, the  statue of Peter the Great and the Cathedral of Christ the Savior in Moscow, “Tear of Grief” in memory of those killed during the terrorist attack of September 11 in Bayonne, New Jersey, “the Birth of a New Man” in Seville, “the Founding Fathers of the European Union” in Ski-Chazelles, France, and the monument to Pope John Paul II beside the Notre Dame Cathedral in Paris.

The word “majesty” best describes the art of Zurab Tsereteli: everything he created is majestic — his sculptures, paintings, drawings. Majesty in this case means greatness, magnificence in the best sense of the word, something significant and elevated on the scale of man-made creations. His works are imbued with religious sentiment and mythological motifs.

His paintings and drawings are similar to his sculptures. In Zurab Tsereteli’s paintings, bright colours are applied with thick and wide strokes depicting fuzzy silhouettes with distorted proportions and shifted perspective. They resemble Georgian-Russian folklore. His works are impulsive and inspired by immediate experiences and emotions. There is an air of sincerity and authenticity of the artist’s national character steeped in love for nature, which is characterised by decency in all thoughts and inextricable connection with tradition.

Zurab Tsereteli is also an exceptional draftsman. It is with his drawings where every his work begins. They form the basis of his sculptures and paintings. They create a structure, and then complicate and refine this basis. Loftiness, majesty, national traditions, religious and mythological subjects elevate his works and make them unique and timeless.